This shot was taken in Hagenberg in front of the bank. Just think about possible security implications out of this situation. Do you see any mistakes made? 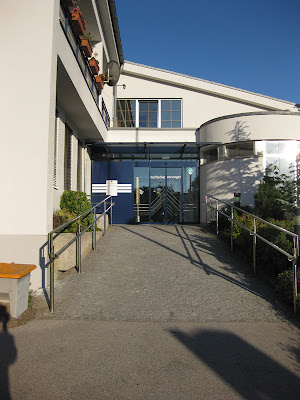 I've marked some major vulnerabilities in the next picture. The weakest link is the tilted window. It's just a matter of seconds to open such a window. The next mistake is the design of the entrance. An attacker doesn't need any preparations like a ladder to get onto the canopy of the building where the window resides. [Edited on August, 12th] Thanks to a friend of mine who made me aware of the simplest of all attack points. I first thought that trying to batter the front door would alarm to police and there would not be practical. But indeed, there ramp to the door is so big that you could even drive your car/jeep into the bank. Inside there is an ATM, which could be pulled out with the help of the car. Therefore it would not take too much time to steel the ATM and the money inside.
One of the easiest and inexpensive ways to lower the risk of such an attack would be to put some concrete posts in the middle of the access road. Although this would not prevent some big cars to break in, it would be a first step to make this site more secure. Thanks to Hector for this hint.
Posted by Tom at 4:44 PM