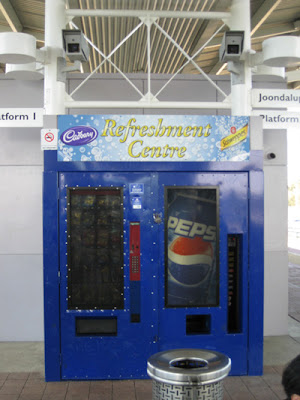 There might be a few problems with this high security station. First it just protects against acts from drunken people, as they just kick or push against the machines. Attackers who first think about possible attack points will enough to go further. For example - there must be some openings for selecting the goods, paying and taking the selected drink. In this case these openings are very generous and you have enough space to get your whole hand or some tools in. You can't see this in this picture, but the machines are placed about 20-30 cm behind the first door, which gives enough room for attacks.
Second, the whole security is built upon the security of the padlock you can see in the middle of the picture. It doesn't look like a high-security padlock. I leave the rest to you imagination.
The third point to mention is that the hinges are accessible for the attacker. This might or might not be a problem. As attacking the hinges will take some time and make some noise, so that security personell will perhaps recognise the attack. I have not and will not try out this scenario.
Perhaps you might come to some additional attack points or have an other opinion. In such a case, don't hestitate to write your opinion as comment to this article.
Posted by Tom at 4:49 PM